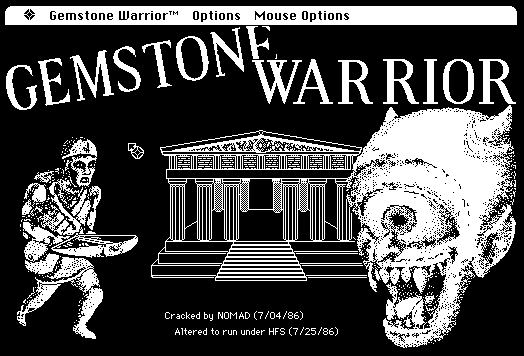 Gemstone Warrior is an action game with adventure elements. Players work their way through an underground catacomb, doing three things at once. First they need to find five pieces of a gemstone, spread throughout the maze. Second they need to avoid getting killed by the guardians of the catacomb. Finally they need to map the game, because the place is so large that it is easy to get lost. Once the Gemstone Warrior has collected the five gemstone pieces, he needs to move back to the point where he began the game.

The hero has to go underground because of demons. They stole the gemstone from humans, because they were jealous of the good magic it brought to humankind. They broke it up and spread it throughout their dungeon, to hide it.

This game is not just a "shoot-em-up"; it has many of the features of that style of game, but also gives players time to think. It includes a pause which helps one map and also to freeze a room, to see what is running toward the Gemstone Warrior. The game also has a save feature, which is useful just before entering a new room: if the Gemstone Warrior is ambushed, players can give him another chance.

After killing opponents, the Gemstone Warrior has the opportunity to search the bodies for treasure. Monsters carry arrows, and also "magic bolts." The latter are interesting, as they destroy treasure too, as well as the Gemstone Warrior, should he be too close to the explosion. Magic items abound, and help the warrior make it through the caverns. Some magic items are traps too; there is a healing potion bottle that is similar to a poison bottle. Other magic items include effects to freeze opponents, turn the warrior invisible, hide him among monsters with an illusion, annihilate all opponents in the current cavern, and cure disease.